a Biblical thought...
Isn't it clear by now that God operates quite differently? He chose the world's down-and-out as the kingdom's first citizens, with full rights and privileges. This kingdom is promised to anyone who loves God. (James 2:5)

a Book thought...
The most inspired, motivated, and driven people I know are the ones who live their lives from the energy of their holy discontentment. (p27 Hybels) 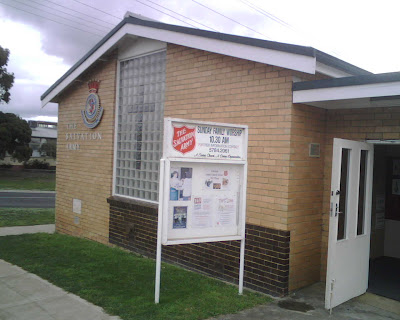 a Dave thought...
On Sunday I was part of the THQ band that conducted the meeting at Broadford corps in the Northern Victoria division. I was asked as part of my involvement to lead the meeting and also to preach. All was going smooth and the meeting was uplifting as we heard testimonies from some of the soldiers and attendees. But the sermon had not yet come, so I began to preach and as I was a few minutes into the message I became conscious of a lady getting restless in the second front row. Little did I know but I had mistakenly left the offering off the meeting lead and Margaret had creatively worked out a way to include this segment. So as I continued to preach to the 25 or so present as Margaret rose to her feet and began to pass the offering bag around the congregation. Rather than trying to curb her passion I quickly asked for Jeff and the band to do another verse of ‘Sing & Make Music’ and the offering was taken. It was after the song that I then realised that Margaret was now waiting at the holiness table for me to pray. Well pray I did, the offering was now taken and now I could complete the final five minutes of my sermon.
Conducting the meeting at Broadford was certainly an experience I will not forget but all credit to Margaret for taking some initiative. I know I have personally been bored listening to other preacher’s sermons and have never had the creativity to somehow give the preacher a break, now I know how.

Just a thought.
Posted by Captain Collo at 6:09 AM

You should join us here at my provincial Corps in the Philippines, there are many very interesting things that can happen! Every week we sit outside in the heat (always bring water and a hand-held fan), dogs join us and lie under seats and wander around the area, kids come and go while playing on the swing set!!! We often dance for the offering, but that is another creative way... during the sermon! Maybe I will get someone to do that next week, see what happens!

Thanks for sharing so regularly, I really enjoy reading your insights and stories. Challenging.