a Biblical thought...
Look at me. I stand at the door. I knock. If you hear me call and open the door, I'll come right in and sit down to supper with you. Conquerors will sit alongside me at the head table, just as I, having conquered, took the place of honor at the side of my Father. That's my gift to the conquerors! (Rev 3:20-21)

a Book thought...
Being a Christian is about engaging the mind and heart more and more, not shutting them off or letting someone else think for you. (p86 Bell) 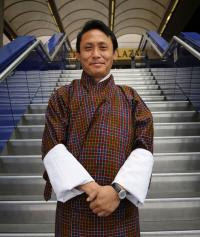 a Dave thought... from The Age
ARE you happy? That's the simple question the Government of Bhutan asked its people in a nationwide census. An incredible 97% said they were.Mr Tshiteem is in Melbourne this week to pass on a few tips to the Victorian Government.
However, happiness does not equate simply to income. Bhutan's capital, Thimpu, is increasingly influenced by foreign ideas that money governs lives, and that is causing depression and alienation.
"Once you cross a certain threshold, money doesn't get you more happiness," Mr Tshiteem said. "Our main concern is that if you have growth which is just blind, fed by people's growing consumption, it's not really sustainable.
"What we are trying to do in our own little context is see what pattern of growth will be sustainable and desirable."
"The pressure from outside, globalisation, TV, it is always 'buy, buy, buy'. They always want to sell you something."

Although it is a phrase we constantly here that "money won't bring you happiness" I have no doubt it is true. Walking through the poor communities in Soweto last year and meeting many happy families who had a few metres square for a home confirmed that. Also in my own life I am now at a stage now where we earn and own very little compared to our last 15 years but must admit life is as great as it has ever been.

Just a thought.
Posted by Captain Collo at 5:39 AM