a Biblical thought...
"Go find this child. Leave no stone unturned. As soon as you find him, send word and I'll join you at once in your worship." (Matthew 2:8)

a Book thought...
We can insist that hope is real and that a group of people who love God and others really can change the world. (p177 Bell) 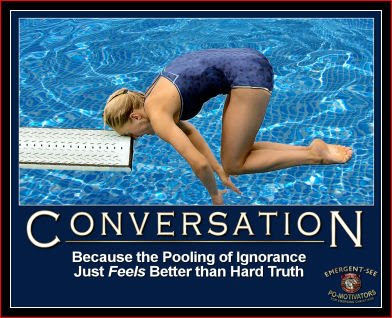 a Dave thought... http://www.blog.christianitytoday.com/
“The emerging church will disappear.” That was two years ago.
Now comes word from recognized leaders and voices within the emerging church movement that the term has become so polluted that it is being dropped. Consider Dan Kimball. He wrote the book on the emerging church—literally. His 2003 book, The Emerging Church, reintroduced the term into the evangelical lexicon. In Kimball’s blog post from last week he writes:
Although I am finding that the term [emerging church] has become so broad now and so confusing, it is very important to know that I am not by any means stopping being involved and pursuing the heart and mission of what the term "emerging church" originally meant. At least in how I was personally using it when I wrote the book 6 years ago.
What did the term mean 6 years ago? Kimball defined it this way: “If you were to have asked me what the core of the emerging church is, I would have responded with ‘evangelism and mission in our emerging culture to emerging generations.’” But, according to Kimball, few people associate emerging with evangelism anymore. (He finds himself using the term missional instead.) Today, Kimball says:
I can't defend or even explain theologically what is now known broadly as "the emerging church" anymore, because it has developed into so many significantly different theological strands. Some I strongly would disagree with.

I have used the term also over the last few years and have offended some and encouraged others but I must agree it no longer describes a particular Christian sub-culture no longer. It seems as more and more Christians have started diverse new faith communities under the emergent heading it longer has value, and no one really knows what it is any longer. It will be interesting to see what the next fad will be maybe we should all just use the word CHURCH at least that is in scripture.
Just a thought.
Posted by Captain Collo at 6:32 AM