a Biblical thought...
I am the LORD your God; consecrate yourselves and be holy, because I am holy. (Lev 11:44)

a Book thought...
Leaders must learn what they can say no to as part of maturing in ordering their life to the voice of God. (p59) 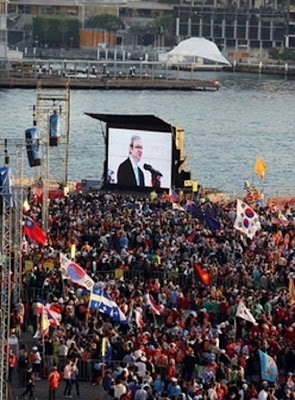 a Dave thought...
PM KEVIN Rudd wants to recruit an army of young volunteers to help the elderly, feed the homeless, and clean up the environment.
In exchange for giving up their time, members of the new Community Corps would get discounts on their university HECS debts. The proposal could attract tens of thousands of volunteers from the 1.3 million Australians with a higher education debt.
The average ex-student has a $12,000 HECS debt, which typically takes more than seven years to pay off.
The scheme could wipe out students' debts as they accumulate hours of community service.
The plan, backed by top business minds and embraced by community and welfare groups, emerged from the Prime Minister's 2020 summit.

This sounds like the PM believes in the young people of this nation, he believes in armies & corps, and in helping the marginalised. I like the guy!

Posted by Captain Collo at 7:56 AM