a Biblical thought...
The LORD was with Joseph and he prospered, and he lived in the house of his Egyptian master. 3 When his master saw that the LORD was with him and that the LORD gave him success in everything he did, 4 Joseph found favor in his eyes and became his attendant. (Genesis 39:2-4)

a Book thought...
Contentment requires a long-term view that grows out of a strong spiritual foundation and continuous pursuit of God's vision for yourself and your organisation. (p121) 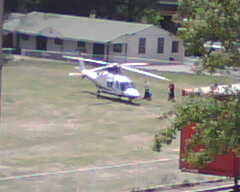 a Dave thought...
Yesterday we spent the day setting up Melbourne High School for INSANE. It was fun at times and it is certainly good to see the final picture of the event coming together. MHS is a heritage listed site and has had some prominent people study there over the years. None more than Lindsay Fox the billionaire trucking magnate, who uses the MHS oval as his helipad. So yesterday while we were setting up it was good to have a couple of visits from the man himself and we're hoping he will be a willing volunteer at INSANE.

Just a thought.
Posted by Captain Collo at 8:28 AM