a Biblical thought...
"You know that those who are regarded as rulers of the Gentiles lord it over them, and their high officials exercise authority over them. Not so with you. Instead, whoever wants to become great among you must be your servant, and whoever wants to be first must be slave of all. For even the Son of Man did not come to be served, but to serve, and to give his life as a ransom for many." (Mark 10:42-45)
a Book thought...
"The servant-leader is servant first… It begins with the natural feeling that one wants to serve, to serve first. Then conscious choice brings one to aspire to lead. That person is sharply different from one who is leader first, perhaps because of the need to assuage an unusual power drive or to acquire material possessions…The leader-first and the servant-first are two extreme types. Between them there are shadings and blends that are part of the infinite variety of human nature." (Robert K. Greenleaf in The Servant as Leader, an essay that he first published in 1970) 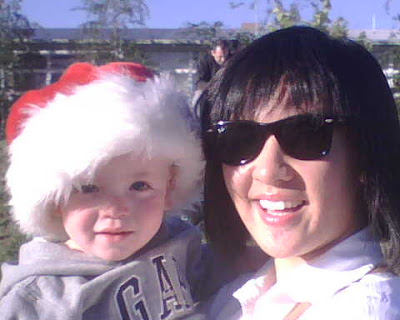 a Dave thought...
As we were getting ready to head out to my son's primary school carols night an unfortunate incident occurred. Josiah our 20 month old was desperate to wear a Santa hat, so Noah obliged and placed one on him. Well Josiah was very happy with his new attire and started parading around the house crawling (as he still is yet to walk). It was only a couple of minutes later when we heard a thud, followed by a scream and tears. Ky went straight away to access the damage and discovered that the adult Santa hat had dropped down over his eyes and because he couldn't see but had continued to crawl had blindly banged into a door frame.
Like my son, I've discovered over the years that trying to keep up with all the Christmas traditions can be a painful experience. Amidst all the parties, carols nights and events going on I often wonder if this is what God envisaged as a result of baby Jesus being born in a stable one night.

Just a thought.
Posted by Captain Collo at 7:06 AM