a Biblical thought...
It swung open before them on its own, and they were out on the street, free as the breeze. At the first intersection the angel left him, going his own way. That's when Peter realized it was no dream. "I can't believe it—this really happened! The Master sent his angel and rescued me from Herod's vicious little production and the spectacle the Jewish mob was looking forward to." (Acts 12:10-11)

a Book thought...
Daily prayer and Bible study ought to be embraced in response to Go's grace, not to guarentee it. (p83 Frost) 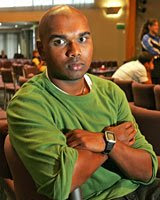 a Dave thought... from The Age
A survivor of the New Zealand canyoning disaster, which claimed seven lives, has told how he jumped into a swollen river and swam to safety, cheered on by schoolmates he would never see alive again.
After a night in Taupo Hospital, Elim Christian College student Kish Proctor, 15 (pictured above), spoke of the tragedy that has plunged a nation into mourning.
Kish told The New Zealand Herald he was trapped in a rocky crevasse by the rising water and volunteered to be the first student to jump into the swollen torrent and swim to safety.
As he leapt, his companions cheered.
It was the last time he saw his six schoolmates and Tony McClean alive.
They died as Kish was swept along by the torrent of water and over a dam.
He prayed to God for help as he tumbled over and over in the raging water. Rocks split his safety helmet and dragged off his boots.
His turbulent journey downstream was halted by a pile of logs and he scrambled ashore to go for help.
He said it was a "supernatural" experience and he thanked God for his survival.
"All I can say is this is my story and this is what happened to me and God saved me," he told the Herald.
Kish said he volunteered to go first and everyone cheered him on but the current swept him out of reach of the instructor.
"I was just gasping for air and I was under the current most of the time. Every time I got up, I just breathed in air and I just called on God's name," he said.
After hitting the logs he called on God for the strength to move, saying he knew if he didn't, he would never get out.
"I just felt it was God telling me, `You have to get up and go, otherwise you're going to die'," he said.
He scrambled out of the water and started walking along the road where two instructors found him and the alarm was raised.
In Taupo Hospital he heard that Mr McClean and his six schoolmates had died.
There is no doubt God still does miracles today, as this story hits the international press many will be intriguiged, some will be cynical, and a few will actually believe young Kish. I am one who believes when a 15 year-old boy prays God hears and answers prayer.
Just a thought.
Posted by Captain Collo at 7:12 AM

The other kids prayed too!

Christians seem to love these stories and proclaim them as miracles and answers to prayers. Yet what of those that died? As they were all from a Christian school I think it is pretty safe to assume that at least some of those that drowned also cried out to God and prayed for Him to save them from death, yet He didn't save them. Do we just accept this as part of God's 'mysterious' plan for their lives? Did he ignore their prayers but listened and answered the prayers of the kid who survived? Do you or other Christians really think these things through and what it means for your faith?

Some fair critiques above - God does seem rather arbitrary if you credit him for saving one but allowing the others to die. It's a dual warning to us that we 1) don't get too caught up in individualism 'God saved me' and 2) are careful about how we attribute God's action/inaction as the result of our prayers.

mate, 7 others died, and I'm sure most/all of them would have prayed too

[1] the selflessness of the (christian) teacher who died trying to (unsuccessfully) save the student with cerebral palsy when he almost certainly could have saved himself (http://www.nzherald.co.nz/feature/story.cfm?c_id=1501824&objectid=10505045&pnum=0)

[2] the deep faith being displayed by the family and friends of those who died ... in particular one of the fathers (http://www.nzherald.co.nz/multimedia/video.cfm?c_id=1&objectid=10504366&content_media_id=4983257)

you can find my initial response at http://www.gavinknight.com/2008/04/nz-mourns-6-students-and-1-teacher.html

Do you ever respond to comments Dave? What worries me about people like you and Court (who writes ridiculous things but doesn't even allow comments, let alone refuses to respond to criticism) is that you are is positions of great influence over young people in the Army yet you display such a kindergarten level of Christianity. Life is so much more complicated than you seem to think it is and you need to be able to do a better job of answering the difficult questions.