a Book thought...
What Jesus is doing, like any decent satirist, is adopting the mindset of those he is criticising in order to reveal their folly. (p58 Frost) 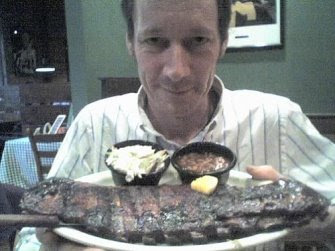 a Dave thought...
Andrew Jones, known online as Tall Skinny Kiwi (after his blogging identity of ten years), was the guest speaker at last night’s Forge Grassroots Festival in Melbourne, Australia.
Andrew grew up in Orewa, New Zealand, before moving to Perth in Western Australia. Last night we heard about Andrew’s early fundamentalist street evangelism days - the importance of having a go and having encouragement to try things out. Since those days in the early 1980s Andrew has spent time working in and out of the United States, in Prague, in a campervan travelling around continental Europe, and now living in the Orkney Islands, Scotland.

After reading his blog for many years it was great to meet him in person as even he said the best way is still real relationships without any technology involved. http://tallskinnykiwi.typepad.com/tallskinnykiwi/emerging_church/

I remember you, vaguely, David. Were you that slightly unwelcoming person at I met at the Box Hill corps one Sunday.

Just enough attitude to convey the message that people like myself were unwelcome.

Thanks for the clarity.