a Biblical thought...
15It is absolutely clear that God has called you to a free life. Just make sure that you don't use this freedom as an excuse to do whatever you want to do and destroy your freedom. Rather, use your freedom to serve one another in love; that's how freedom grows. (Gal 5:13)

a Book thought...
Boomers top concerns for the twenty-first century are ethics, environmentalism, and meaningful experiences, all of which can best be accomplished together. (p108 McIntosh) 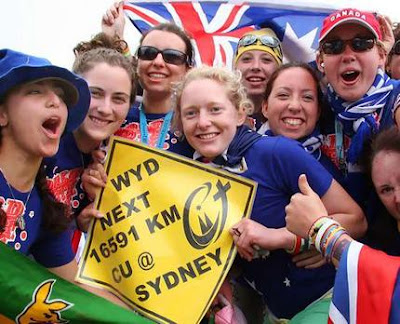 a Dave thought...
TWELVE years ago, the Redemptoris Mater Missionary Seminary opened in Denver, Colorado. Shortly after, a second training college for priests, the St John Vianney Theological Seminary, opened its doors.
Between them, the colleges taught 108 students last year and there are now about 40 trainee priests studying at the Redemptoris Mater. Since 1996, 10 seminarians from Redemptoris Mater have gone on to become priests in the Denver archdiocese.
According to Denver's Archbishop, Charles Chaput, both schools sprang up as a result of Denver hosting World Youth Day back in 1993.
They were not the only results. "I'm sure that the World Youth Day in Denver led to thousands of conversions and reconversions (within Denver and elsewhere)," says Chaput, adding that Denver World Youth Day is still "considered a great blessing for the whole church in the US".
The man responsible for organising this year's World Youth Day in Sydney, Bishop Anthony Fisher, gets excited when he talks about Denver. Or Cologne or Paris, other Youth Day cities, which Fisher says have also enjoyed significant spiritual benefits as a result of hosting the massive youth festival.

World Youth Day is coming to Sydney in a few weeks, & I'm really looking forward to being a part of it. As all denominations have discovered it is often through these large youth gatherings that many young people commit to a lifetime of dedicated service to God and the church. So with 225,000 Catholic Youth expected to attend in Sydney in 23 days time I'm sure the Sydney seminaries will be inundated over the next few years. Perhaps we should look at holding a big Salvo youth event in Melbourne, actually we are - inSAne is coming Jan 11-18 and I'm sure God will call young people to officership there too.

Just a thought.
Posted by Captain Collo at 7:37 AM

Dave
Were the Catholic Youth invited to attend Connections? Or was it a closed denominational affair??
Perhaps inSAne ought to be an inter-denominational 'SA-organized' youth event instead.
Widen both the blessing and the influence!
Just a thought...

It is on Wednesday 16th at Bondi Beach.