a Biblical thought...
David was greatly distressed because the men were talking of stoning him; each one was bitter in spirit because of his sons and daughters. But David found strength in the LORD his God. (1 Sam 30:6)

a Book thought...
Let God stretch you. Attempt what others say can't be done. (p179) 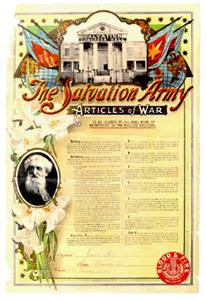 a Dave thought...
After John Cleary spoke with the DYs this week he passed on an article to us where he addressed his concerns on soldiership. Here is a couple of paragraphs to wet your appetite...

We have to find a way of reviving soldiership.

Perhaps one way towards this is to formally recognise what de-facto has been the case for almost a century. We are a distinct denomination and need to accommodate the needs of a far wider group of communicant members than a concept like Soldiership does. Soldiership will be killed if it continues to be tied to membership. Why? Because you will be forced to hold your reasonable demands on soldiers to that of the lowest common denominator of your members. Similarly membership will continue to decline if it is pegged as soldiership because less people will see soldiership as necessary to the living of an ordinary Christian life. Both of these propositions are unarguable, they are happening before our eyes and will continue to do so unless the position is changed.

Would it not be great if a C.O. could know of her soldiers at the start of the year, that she had a committed portion of their time given in stewardship to the Army? That the soldiers had said from the beginning of the year ‘my spiritual work and worship will be in and through the Salvation Army and to that end I will commit to the Army X hours a week. That’s giving soldiership meaning, that’s giving the corps officer a real force, that’s giving a movement back the ability to wage war.

There is a flip side to that coin. The officer also has to be held to account if they fail to engage/facilitate their soldiers in faithful service, and soldiers for whom there's no need in corps teams need to be positively mentored, 'missioned' and encouraged while they work outside the corps arena. From what I've seen as a soldier the problem is at least as much a disinterest in developing and creating communitas for soldiers as it is soldiers expected to be, and habituated to being, sheep in a Christendom-shaped congregation.

What's the deal with God? We surrender all, unconditionally, to the God who sent his Son to die for us. What's the deal with the army? It needs to be fair, visibly just and equitable, with soldiers valued and invested in, their vocation actively discerned and supported. That models mutual respect, justice and lovingkindness.