a Biblical thought...
I will deal with them according to their conduct, and by their own standards I will judge them. Then they will know that I am the LORD. (Ezekiel 7:27)

a Book thought...
I think it is right and proper that you should devote a portion of your time and energy to the duty of sanctifying yourselves and of spreading a full salvation among your comrades. But nothing can relieve you from the duty of fighting for the salvation of dying souls around you. (p67) 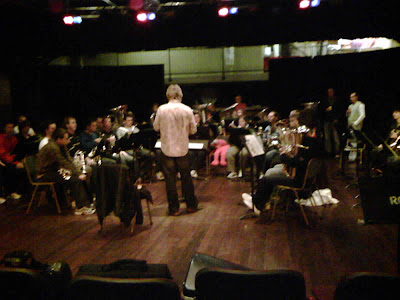 a Dave thought...
Over this weekend the Melbourne Staff Band has been hosting their annual Future Brass weekend for Salvo musos aged between 12-25. This is an opportunity for young brass players from around the country to come together for a weekend and be inspired. Not only do they get to play in a great band but they also get to sit under the world class bandmaster Professor David King. I dropped into the rehearsal yesterday and learnt that 15 interstaters had made the effort to be part of the two bands. This afternoon there will be a concert at 3pm at the James Tatoulis Auditorium Methodist Ladies College, Barkers Road, Kew. I'm sure it will be a great event as many gather to champion on the future musicians of our movement. http://www.salvationarmy.org.au/msb/

Just a thought.
Posted by Captain Collo at 5:55 AM

I love that quote by William Booth and pray that an outward focus and that 'others' would always be our priority. Salvos out there round the world... my dream.