a Biblical thought...
He follows my decrees and faithfully keeps my laws. That man is righteous; he will surely live, declares the Sovereign LORD. (Ezekiel 18:9)
a Book thought...
We need many more enterprising people who are job-makers rather than job-takers, and we need our leaders to be enterprising as well. (p221) 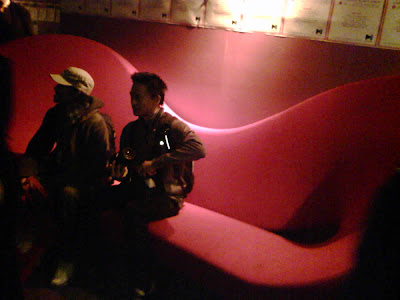 a Dave thought...
Last night Kylie and I went along for the official opening of The Couch - a centre for international students at 69 Bourke St. The Lord Mayor Robert Doyle and Collingwood footballer Harry O'Brien both spoke and endorsed the centre and declared it open. For the launch 614 blocked off Westwood place and had a street party complete with a live band and food. There was a great vibe around the place with literally hundreds of international students present to celebrate.

Major Brendan Nottle was once again a big part of making this initiative happen. One night he was out on the streets with their van feeding the homeless when he came upon a student from Mauritius. Brendan was overcome by his story as he heard of the deception that was used to attract him to Melbourne to study and the amount of money he had paid along the way including what he thought was going to be great accommodation. Well ten months later thanks to Brendan's networks and drive we now have an amazing centre designed to meet the ever growing needs of international students. Brendan is a great example of someone who is constantly out in the community and when he sees an unmet need does everything possible in God's strength to do do something about it. I thank God for his passion, energy, drive and heart and pray that more of us will take initiative to meet the needs evident in our local communities.

Just a thought.
Posted by Captain Collo at 6:00 AM