a Biblical thought...
Milk is for beginners, inexperienced in God's ways; solid food is for the mature, who have some practice in telling right from wrong. (Hebrews 5:14)

a Book thought...
The bible tells us that when God's reality breaks into our world, the earth will be filled with justice. (p164 Sayers) 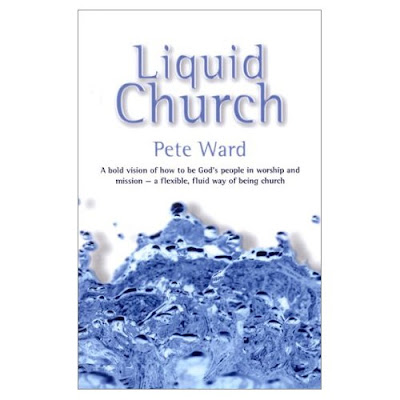 a Dave thought...
Peter Ward uses the term liquid church to describe the essence of what a truly networked church would look like; a church responsive to that increasing fluid dimension of our culture which Bauman called liquid modernity. He contrasts liquid church with what he calls ‘solid church.’ To simplify this, solid church is roughly equivalent to what I have here described as institutional church. Because of the continuing existence of solid modernity he does not counsel the total abandonment of solid church, but he does suggest that it is one of decreasing effectiveness. Solid church is related to solid modernity. And solid church has generally mutated from its original basis into becoming communities of heritage (that embody the inherited tradition), communities of refuge (a safe place from the world,) and communities of nostalgia (live in past successes). He suggests that almost all manifestations of solid church fall into one or more of these categories.

I have read a few quotes and reviews from this book and I am I certainly one who sees that the church needs to become more liquid. Most of our expressions are solid and are based out of one building, at one certain time of the week. Unless we have a sense of flow and the ability to adapt to different times and cultures we maybe solid but unable to adapt the gospel to an ever-changing world. As Peter says“we need to let go of a static model of church that is based primarily on congregation, programs, and buildings. In its place we need to develop a notion of Christian community, worship, mission, and organization which, like the NT ecclesia, is more flexible, adaptive, and responsive to change.”

Just a thought.
Posted by Captain Collo at 8:17 AM

An interesting post and an interesting title “Liquid Church”, fits well with the postmodern liquid mindset. However, as Craig van Gelder notes in his Essence of the Church, "The understanding of the church must start with an understanding of the kingdom of God. More specifically, it must start with the announcement of the inauguration of God's redemptive reign in the person and presence of Jesus. The redemptive reign of God must serve as the foundation for defining the nature, ministry and organisation of the church. The church must find its core identity in relation to God's redemptive reign as introduced by Jesus in his announcement that the "kingdom of God has come near". (pg.74) Furthermore, "In developing a more fully-orbed missiological ecclesiology, three aspects of church life must be defined and related to one another: what the church is - its nature; what the church does - its ministry; and how the church is to structure its work - its organisation. The interrelationship of the three aspects is clear. The church is. The church does what it is. The church organises what it does" (pg37)

It is true to say that how we understand the church has implications conerning our understanding of what it means to be a missiological ecclesiology. Getting it wrong can reduce us to be little more than a bunch of programs that a designed to accomplish our own goals. Not overly sure liquidity is the answer to the strains we are feeling as an organization. WJE