a Biblical thought...
Most of all, love each other as if your life depended on it. Love makes up for practically anything. Be quick to give a meal to the hungry, a bed to the homeless—cheerfully. (1 Peter 4:8)

a Book thought...
Bono was so stirred up in his soul after serving the poor in Ethiopia that he said, "I've got to give myself to something more than making records." (p105 Hybels) 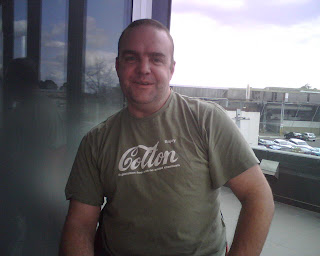 a Dave thought...
Darren Frazer is an impressive Kiwi who I met at Make Change in January this year. Last week he dropped me a line on facebook to let me know he was visiting Melbourne for a Fairtrade conference, so yesterday we found a couple of hours to have lunch together. He shared his story with me that as result of being at a Salvo Just Action conference a few years ago with Major Campbell Roberts, he was inspired to start wearing clothes not made in sweat shops. As he went on the search to buy some Fairtrade clothes he discovered it was way too hard, and as a result set up Micah Clothing. Darren quotes Catherine Booth "to better the future we must disturb the present" and I admire him, as rather than just talk about Fairtrade Darren has sacrificed a lot of time and personal finances and set up a small business to help change the way people are treated in this world.

Micah Clothing is based in the small Southland town of Winton. It is Darren's hope to travel around New Zealand and beyond raising awareness of trade and justice issues, while at the same time letting people see his range of products. If you want to personally make an effort to wear Fairtrade clothes check out the website or better still buy something from http://www.micahclothing.co.nz/catalog/