a Biblical thought...
God's readiness to give and forgive is now public. Salvation's available for everyone! We're being shown how to turn our backs on a godless, indulgent life, and how to take on a God-filled, God-honoring life. (Titus 2:11)

a Book thought...
Unlike the hyerreal world which tells us we must escape the ordinary to find pleasure, Jesus shows us how to find pleasure in the midst of real life. (p127 Sayers) 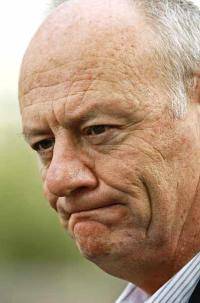 a Dave thought... from The Age
Monash University research shows problem gamblers accounted for almost half of the record $2.6 billion lost on poker machines last financial year. The City of Dandenong has the highest percentage of problem gamblers, who lost $62 million on pokies last financial year. Next came the municipalities of Maribyrnong and Brimbank. The research shows that 1.6% of the Victorian population, or 63,700 people, are problem gamblers. "People living in disadvantaged areas experience both greater losses per adult and higher rates of problem gambling in a systematic way," the report said.

Anti-gaming campaigner Tim Costello said the Government had not conducted such research because it feared the results. "This is an issue that concerns Victorians and (the Government) are withholding evidence and research we need," said Mr Costello. "Gambling is one of the issues that concerns people the most in Victoria. The truth is, the last time Victorians were surveyed, 86% said they wanted fewer pokies and a majority wanted the pokies removed."
The gambling problems are still rampant across the state of Victoria, I continue to admire Tim Costello's stance against the government on this issue. As the lower socio-economic areas continue to be overloaded with pokies surely it is an issue we should be supporting Tim with. The Salvation Army is a part of the anti-gambling task force but maybe we need to step it up even further.
Just a thought.
Posted by Captain Collo at 8:01 AM

Notice how mention of personal responsibility is absent in Christian discussion about problem gambling - a concept that does not appear to part of Tim Costello's lexicon.

I'm not aware of any legislation which mandates people to gamble.

It is a simple free choice.

Problem gamblers only have themselves to blame. We should not indulge them with tax-payers' money.

I will not dontate to any Salvo fund that directly supports problem gamblers.

David (not Collo) - your recent comments seem to indicate that you understand the poor to be largely responsible for their own predicament. Whilst there may indeed be some valid contributing factors here including addictions like gambling, drugs or alcohol, I believe these to be symptoms as much as causes. I would hope that if you really got to know some people with serious problems that compassion might balance judgement... Regards, JDK

You continue to ignore the aspect of personal responsibility, JDK.

Why is it so difficult for you to understand? There is no compulsion to step into a pokies or other gambling venue and exchange money for pointless distraction.

The answer to gambling problems in Victoria is not to restrict the numbers and places of gambling venues. No, this only leads to extraordinary profits for a priviledge few corporations. The answer is to allow gambling venues to saturate the market to meet all demand.

Use the free market, not some socialistic, nanny-state approach.

Free market? I am not sure if there is even such a thing. Why? Well because many believe that structures, social, economic etc are just as fallen as the people who inhabit them. You will find that many Salvationists lean this way because many recognise the broken state of the whole world not just its people. So we need to continually seek to redeem such structures including our own.
You will notice that Tim Costello challenges the most insidious aspects of Poker Machines because these are the most likely to catch people out. Pokies manufacturers are well researched in how to attract people’s attention and continually seek ways to maximise profits on a machine. Tim does not try to rid the world of pokies, probably because that would be too hard. Instead he challenges the most sinful aspects of their design, location and patronage.
This does not deny personal responsibility but shows a broader concern for the welfare of all people. Opening up a free market on pokies would just create more situations of exploitation, and quite possibly create more exploiters.

Collo thanks for highlighting the concern the pokies create. We should not only support Tim but learn from his methods so we can better address the issues associated with the poker machine industry.